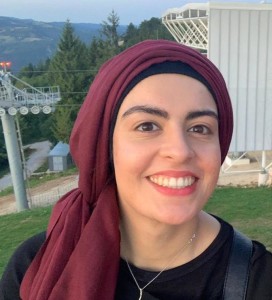 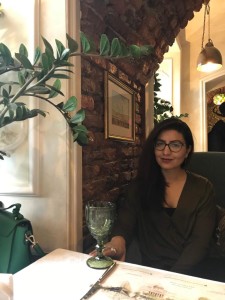 Hira and Maryam are co-founders of Our World Too, an organisation dedicated to changing the media narratives about refugees.

Through sharing the stories of individuals with refugee experience, they hope to help people realise they have more in common with refugees than with politicians and others who continue to create divisions. Our World Too are taking part in Refugee Week for the first time for 2021, and their plans include sharing narratives and launching a new campaign.

1. What have you worked on recently that you want to tell us about?

Hira: Honestly, I’ve just spent a lot of time on developing strategies and long-term plans for Our World Too. We have a lot of exciting things coming up so if you’re not already following us make sure you do so you don’t miss out.

Maryam: Recently, I’ve also spent a lot of time on developing strategies and long-term plans for Our World Too.

2. How would you describe your job/ what you do to a five-year-old?

Hira: We share the stories of people who have been forced to leave their homes to find a safer life somewhere else. We hope to help people realise we really aren’t that different from each other.

Maryam: We are storytellers! We listen to people who lost their homes, their family, friends and towns they lived in. We share their stories with their permission to help other people understand and know them, because knowing and understanding people helps create friendships.

3. What is the worst job you’ve ever had?

Hira: I wouldn’t say it’s the content or job description that makes a job bad, but there have been more than a few instances where someone has talked down to me or questioned my dedication to a certain cause because of my religion or because I’m a woman from a minority group.

Maryam: When I was young my dad told us that no job was a bad job, a job is part of our skill set not our identity. I believe you learn something new in every job and it helps diversify your skill set. I have had my fair share of being frustrated at jobs, but this is the point where you really need to reflect and see what is missing for you to move to the next level.

4. Where did you grow up and what was it like?

Hira: I am a third culture kid to the core. We moved around a lot when I was younger because of my dad’s job so I grew up in multiple cities across the UK and Saudi Arabia, with random periods of time spent in Pakistan. The most memorable place by far though was Riyadh, I loved growing up in this incredibly diverse community. We used to have these huge Eid parties where everyone in the community would get together and celebrate, my friends and I absolutely hated going back then because we literally saw the same people at school and in the mosques, but we really miss them now.

Maryam: My childhood was mostly between Pakistan and Kashmir. I grew up on a street where everyone was a refugee in light of 1947 partition of Colonial India. It was beautiful as this is when I learned the importance of storytelling from all those elders in my neighbourhood who left their homes and families behind to reach to safety.

My summers in Kashmir were surrounded with beautiful memories of hiking and trying to help my cousins out in the field (though I used to make things worse), having fresh fruits and veg, sitting around telling ghost stories and listening to our grandparents and elderly uncles talking about colonial oppression, fighting for British armies in the World Wars and the ongoing conflict of Kashmir. No wonder I am so political!

5. Growing up, what was your dream job?

Hira: I wanted to be a fiction writer, to be honest I still do, but between establishing Our World Too, finishing my masters and working full-time I haven’t had the time recently to dedicate to it. A few authors have read my work and really liked it. It’s super encouraging but I have to really concentrate to make sure the story flows.

Maryam: I really wanted to be part of a flight crew, I just liked how on airlines ads they were always smiling, meeting new people and travelling around the world. I also wanted to tell stories like Asfaq Ahmed (though he was a writer and broadcaster). I loved how he told stories in a way that it drew attention to current issues. So, I become a social worker and co-founded Our World Too, think I managed to achieve some of my goals!

6. If you had to be shipwrecked on a deserted island with food and water, what two items would you want to have with you and why?

Hira: A flare gun and sunscreen – you have to keep that skincare game on point.

Maryam: AHH sunscreen off course! and my music as I like dancing to music all the time, but let’s just hope it never happens as I like humans and want to be around them.

7. How do you think your family and friends would describe you?

Hira: I think they would describe me as dedicated. Once I commit myself to something, I try to see it through.

Maryam: Gosh that’s hard, my colleagues at work call me the queen of managing crises (guess comes with the job), determined, passionate, level-headed and self-made.

8. Can you give us a film, podcast or book recommendation?

Hira: It’s none of the above but there’s a great show on Netflix called The Protector, it’s basically a Turkish superhero show. I loved the fact that the show is rooted in Turkish culture which gives a new spin to the traditional Western superhero shows. I also loved the main female lead Zeynep, she has an incredible story arc, is super smart and witty and saves the hero more times than I can count.

Since that technically didn’t answer the question though, I would recommend a book called ‘The Last Refuge’ by Hasan Nuhanovic. Hasan is a survivor of the Srebrenica genocide in Bosnia and Herzegovina and it’s his retelling of the beginning of the war and how he and his family made their way to Srebrenica.

Maryam: I think one of the recent things I saw on Netflix was Stateless, It was interesting as it combined the conversation about mental health and Australia’s process of manging refugees and asylum seeks, very humanising.

I guess the best book I can recommend is A Thousand Splendid Suns by Khaled Hosseini. He really knows how to tell a story and talk about life within conflict and displacement.

9. Who inspires you to do what you do?

Hira: The first person who comes to mind is definitely my dad, his work ethic and personal ideals have motivated me for a long time. More recently, it’s been our participants, every single person we’ve spoken to has been through the most challenging and traumatic circumstances, but when you speak to them, they are full of determination and hope. They chose to see the best in humanity rather than the worst. I’ve learnt so much from them and I hope everyone who reads their narratives will feel the same way too.

Maryam: Storytelling has had a huge impact in shaping my perspectives and understanding of the world. Not only were these storytellers wise but they also had lived experience of displacement. It helped me see the world through their lens and motivated me to help others see it through the same method. Hence, we created Our World Too as we do believe that narratives have the power to break barriers and connect people.

10. What would make the world a better place?

Hira: If we could all learn to see the world through someone else’s eyes, I would like to think there wouldn’t be as much hate in the world.

Maryam: I truly believe compassion is the key which can lead this world to be a better place to live in, not only for humans but also other living beings as well. It is compassion which break the boundaries and helps bridge distances and divides.