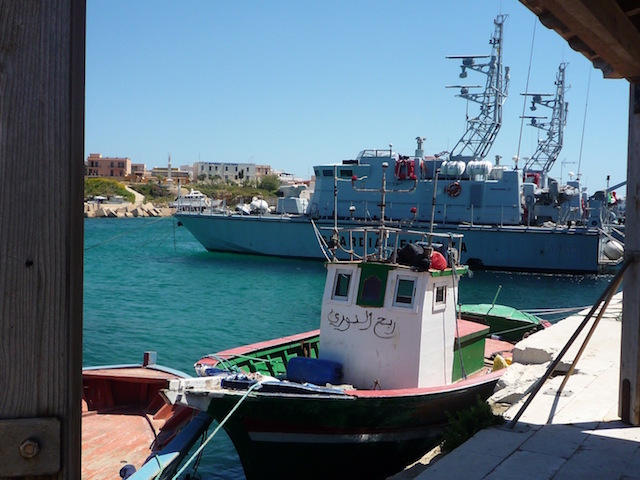 T06411 is a North African migrant boat, named after the official code given to it by Italian customs when it was seized close to Lampedusa in 2012, with 36 migrants on board.

Over the course of three years, artist Lucy Wood regularly travelled to Lampedusa to collect and document migrant experiences through found objects, photography and interviews. She asked the island authorities to give her a rescued migrant boat, with the intention of sailing it from Lampedusa to London.

After two years of persistence Wood was eventually offered boat T06411 and she spent nine months living on the island, preparing for the project, restoring the boat and taking a short navigation course. She then set sail on a 4000-mile solo voyage from Lampedusa, arriving in London nearly four months later.

Wood travelled with the objects that had been abandoned by the migrants on the boat, displayed filmed footage of the stories of migrants that she had met and organised ‘sit-ins’ en route for the public to experience the cramped conditions onboard.

After reaching London T06411 was moored close to Surrey Docks and the public were invited aboard. Having arrived in London shortly after the shipwrecks of the 3rd and 11th October 2013, the UK press deemed her arrival to be too controversial to publicise at the time but two months later, on World Refugee Day 2013, a group of politicians and religious leaders took a short trip on T06411 down the Thames to Westminster.

T06411 will be moored on Regent’s Canal in Kings Cross, where the public can see the boat and it’s contents and discuss the project with the artist. The experience of seeing T06411 in reality is very different to seeing images of migrant boats in the media. It allows visitors to be able to more closely imagine travelling with so many people on such a small and unstable vessel on the open sea and the desperation that must be involved in making such journeys.

TO6411 serves as a ‘floating art installation’, displaying many of the belongings abandoned by the migrants on board and films the artist made with migrants in Lampedusa.

Were to see it: The boat will be moored for public viewing on the canal towpath near Green Steps, Granary Square, Kings Cross, N1C 4AA during Refugee Week, 17- 23 June, 12pm- 6pm daily. Lucy Wood will be available to meet visitors and discuss the project during these times.

The installation is part of the highly acclaimed Sink Without Trace exhibition on migrant deaths at sea, currently on at the P21 Gallery, 21- 27 Chalton Street, Kings Cross, London, NW1 1JD from 13 June- 13 July, 15 minutes walk from T06411.