By Erin Cobby at shado. View the original article on the website of shado,  a lived-experience led community of artists, activists and journalists united in the fight for social justice.

shado and Counterpoints Arts have collaborated on a series of articles in celebration of Refugee Week 2022. They are written by artists, activists and journalists who are creating change in their communities and exposing first-hand the hostility of the UK’s asylum system. In this piece, shado speaks to Nima Javan, an artist who came to the UK in September 2019 and later settled in Liverpool and then London.

“Rarely, if ever, are any of us healed in isolation. Healing is an act of communion.” – bell hooks

When I start my call with Nima Javan I’m immediately overwhelmed by colour. The Persian artist has created a Zoom background out of his own work, his face suspended amongst the characters that make his paintings so special.

I laugh, making the comparison to the banal white wall behind me, and he removes the background, only to be replaced by his studio, where the display of his numerous and intricate paintings are, if anything, even more eye-catching. Immediately it’s apparent that this is an artist who lives and breathes his work.

Nima has been chosen to create the image for this year’s Refugee Week, the theme of which is ‘healing’. Employing his characteristic style which fuses Persian art alongside more modern figures, Nima has created a complex blue and white image full of animals, people and structures. They are all interconnected and grouped around the word ‘healing’, embodying the idea of collective nurturing that is needed by refugees and communities seeking asylum as a whole.

When describing the image and what it means to him, Nima says: “The first character I see when I look at the image is someone weightlifting. I wanted to depict the idea of regaining power and the ability we have to exercise change in the world.”

He continues: “I also wanted the image to showcase different people’s lifestyles and to highlight that healing is about having the freedom to go after opportunities, whether that’s doing activities you enjoyed in the past or looking for new activities to pursue in the future.”

For Nima, healing is a perfect theme for Refugee Week. “We all need healing to grow and enter into society, and in that sense progress is unavoidable. It’s our destiny.”

The inspiration for this piece, and his wider work in general, comes from studying Persian carpets and miniature paintings. “When I first started making art in the UK I was just experimenting with my modern characters. I showed them to other artists and they told me that my paintings had no atmosphere,” he laughs.

“So I decided to study objects in traditional art, and I wove my background, my memories and my country into my work. I realised that without a background, we don’t have anything to define our paintings by.

I also added in new things which represented my current lifestyle. For example, while animals in Persian art of this sort are often depicted in hunting situations, I instead choose to show them in harmony with people, to create a more peaceful world.”

To create these worlds within his work, Nima uses multiple techniques. “Because most of my concepts revolve around peace and friendship, I need to use my hands to create that paradise. It’s the best way to show feelings. I also use graffiti cans for larger scale paintings as well as paint brushes. Whatever the tool, my work is always about expressing how I feel about that subject.”

For Nima, it seems that painting isn’t just a way for him to portray the kind of world healing can achieve – the process itself actually aids his personal healing. “On days that I don’t paint, I feel depressed,” he explains. “When I paint, it’s the best way for me to heal as I can visually create the enjoyment that I want to feel.”

Nima believes that the power art can have isn’t just reserved for artists, but can positively affect society as a whole. “Through art you can publish positive meaning. People are individuals, but art can make people a team and in that way painting can build a society.”

This idea is something Nima has shared with others, both through teaching in institutions in Iran and Greece and through facilitating workshops here in the UK on portraiture and caricatures. “I love teaching because a lot of painters work solo. However, everyone has their own style, so everyone can become a teacher. Everyone can learn something from somebody else, and that’s how a community is born. When you teach painting you feel useful; not only do you become part of a community, you can also provide support for other people. In that way it’s almost like social work.”

This community that art can create is also something Nima doesn’t believe needs to be bound by interpersonal relationships, and that he has found community with artists by just learning about them and their work.

“The subjects of my work are often my friends and family,” Nima explains. “I saw this replicated across so many masterpieces when I visited museums and galleries in Liverpool and London. When we study the life of artists, we realise that a lot of these people have had the same experiences, therefore we can find our future in their art”.

Finding common ground with some of his favourite artists like Karl Apple and Damien Hirst has further rooted Nima’s belief in the power art has to bring people together, especially as he went to see these masterpieces with other artists from London. “Since moving here, there’s been lots of organisations willing to help me and I’ve found many new friends amongst the creative communities.”

Looking forward, Nima wants to further establish himself as an artist and increase his influence in the art world so he can continue to show his new worlds to others. He hopes to come full circle and eventually have his own show in Tate Liverpool, the first gallery he visited in the UK.

Reflecting on his work and the power of the worlds he creates, Nima remarks: “when you mix traditional and modern art together, you create a postmodern world. You create a world that is more flexible and can provide everything we need. In these worlds, you can see what the future can look like. In these worlds we have the space to heal.”

What can you do? 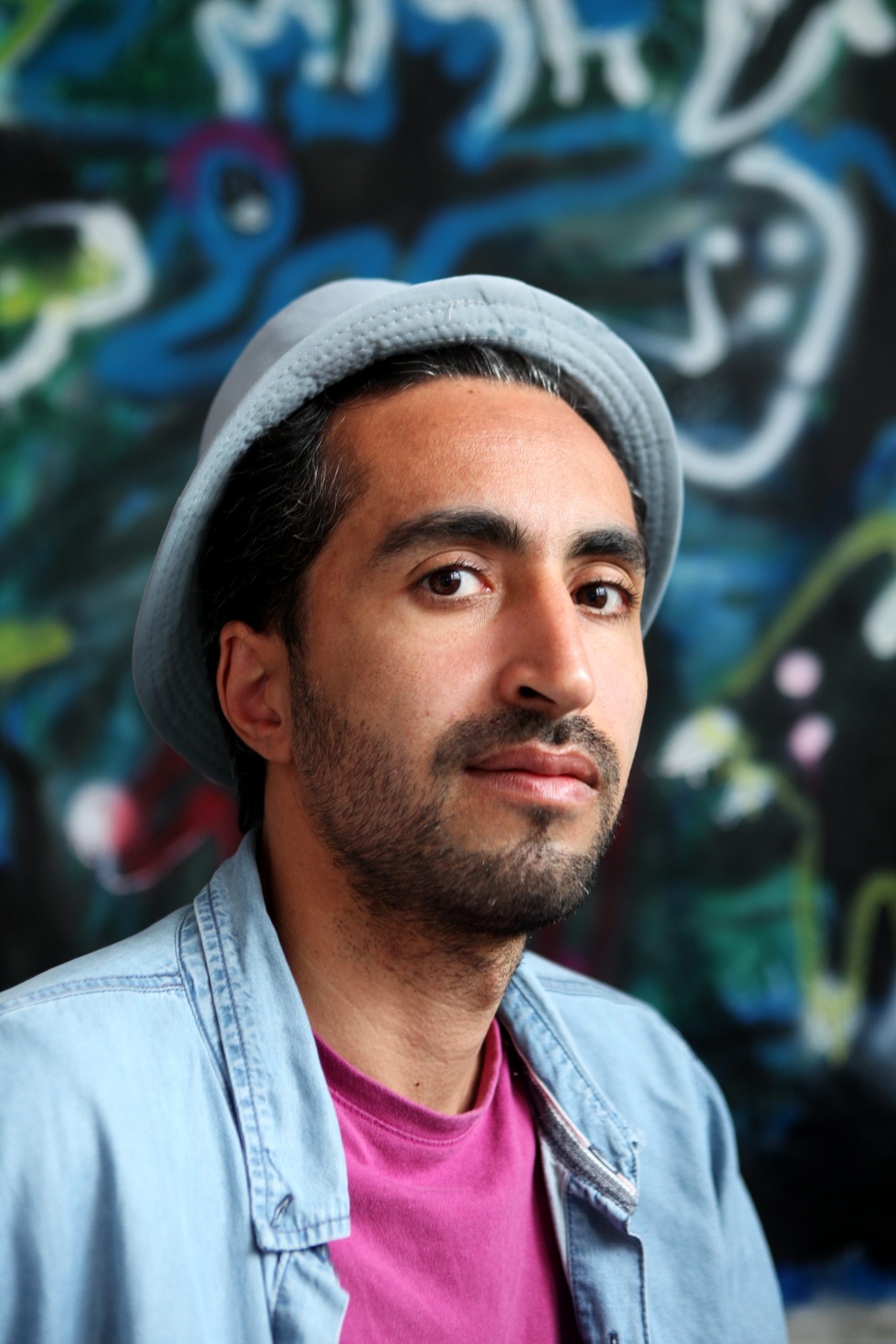 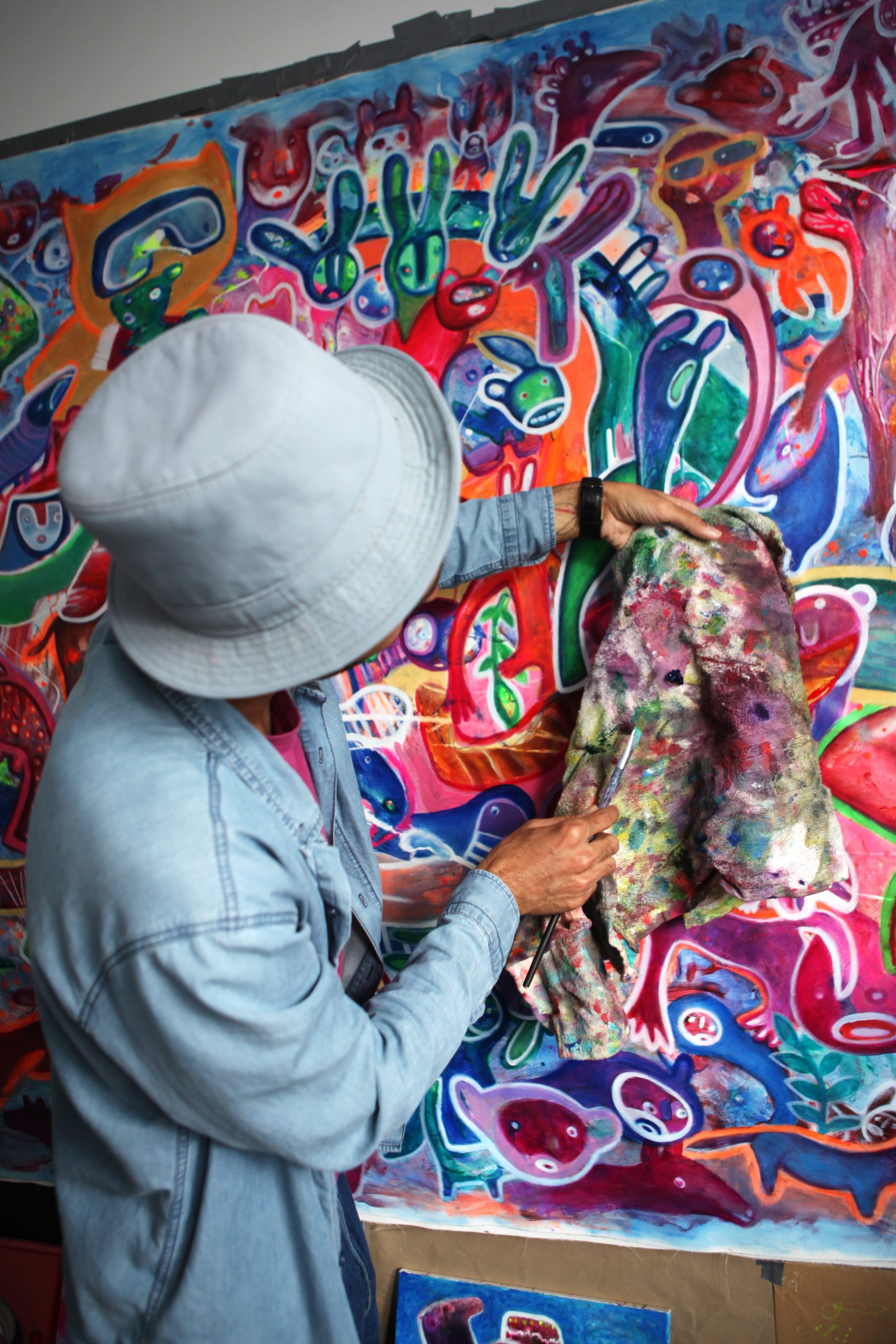 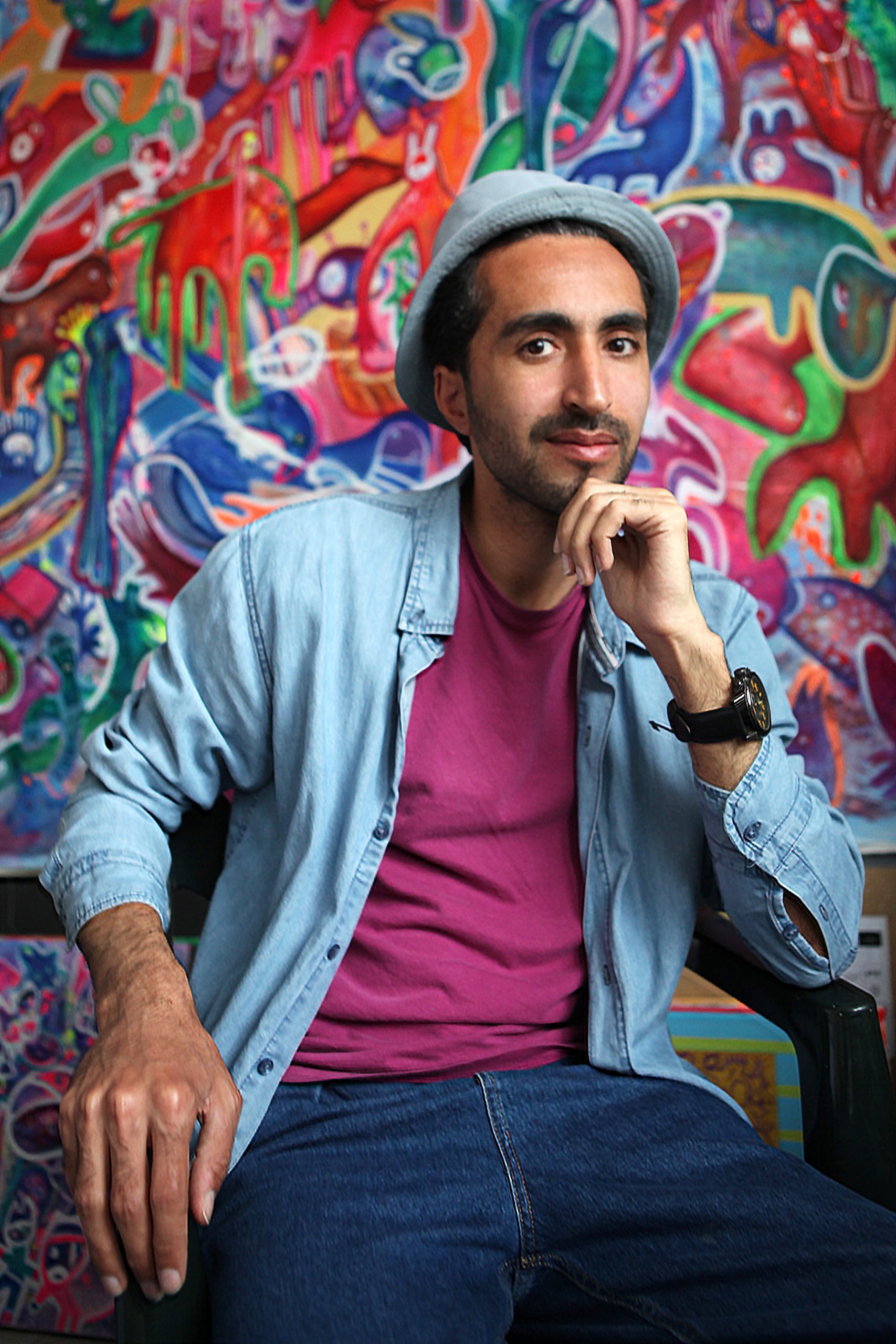 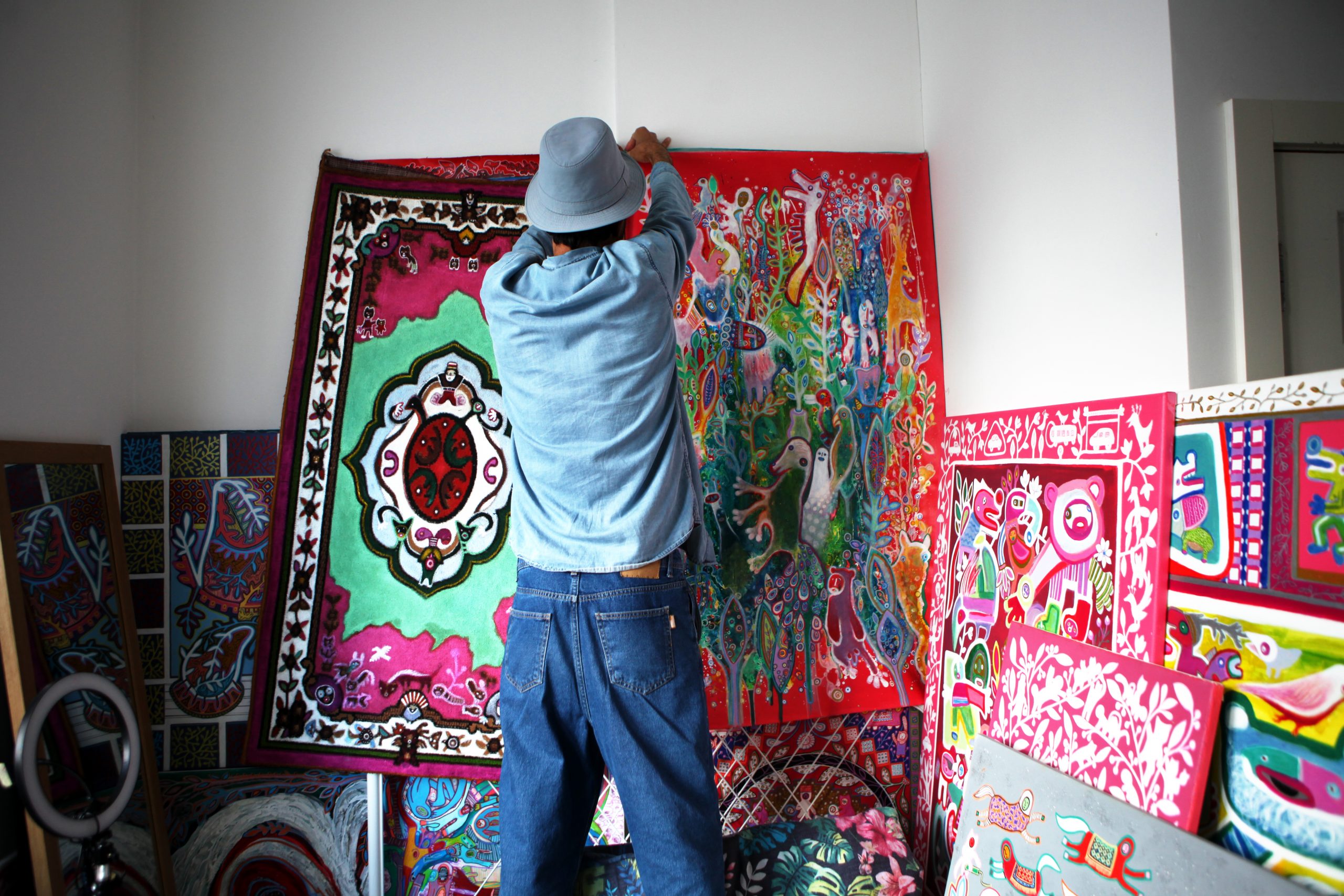 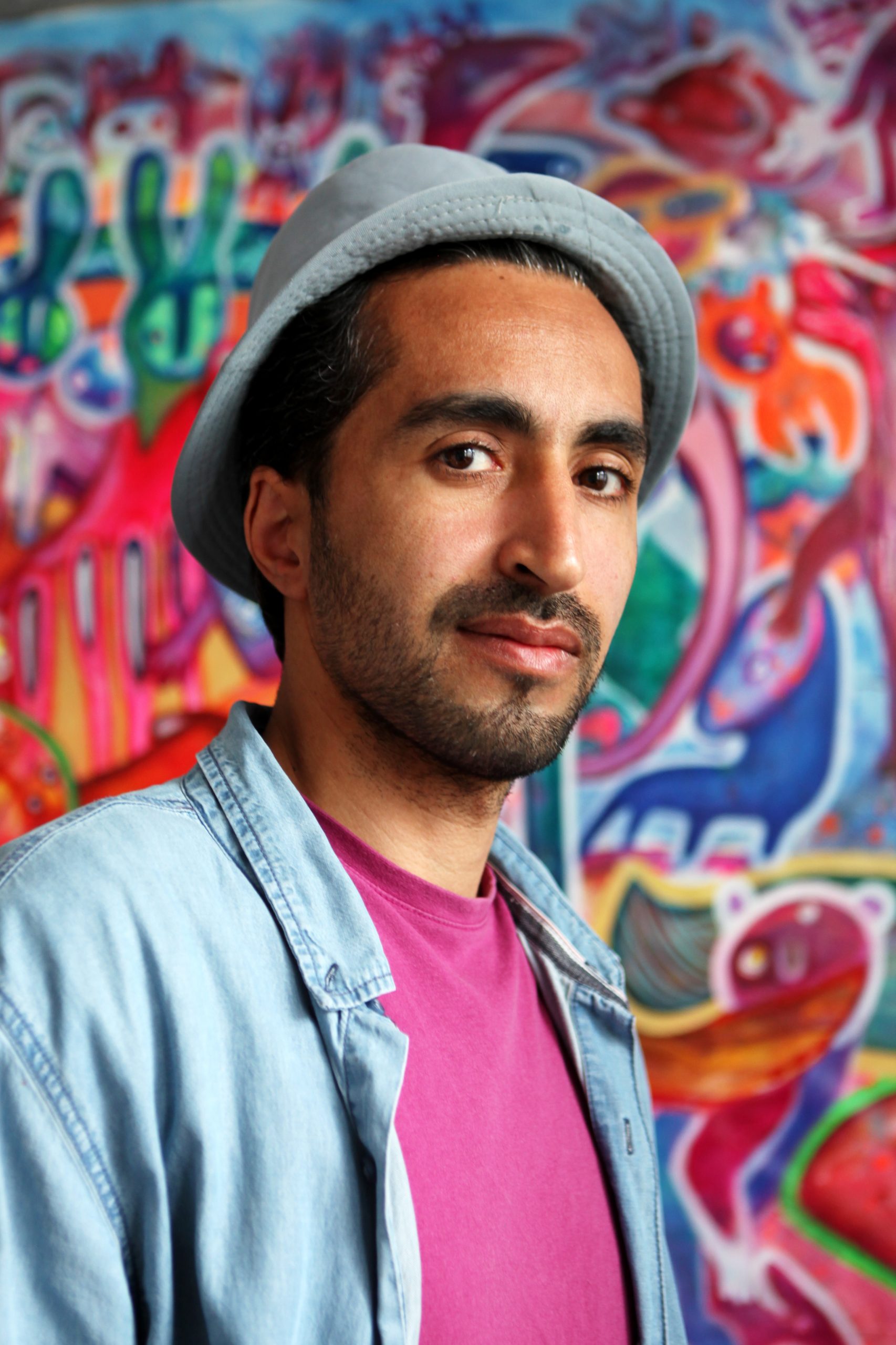 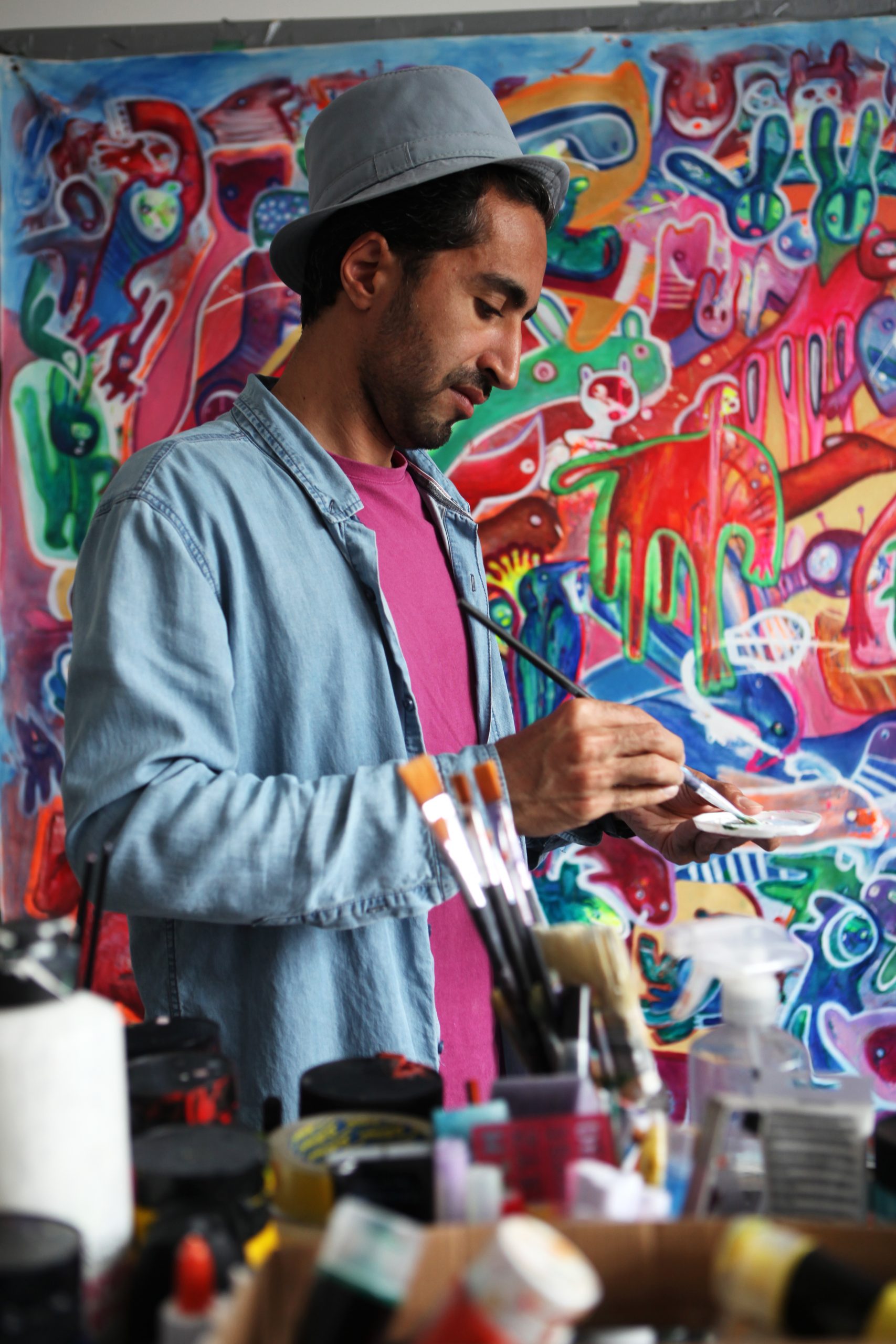