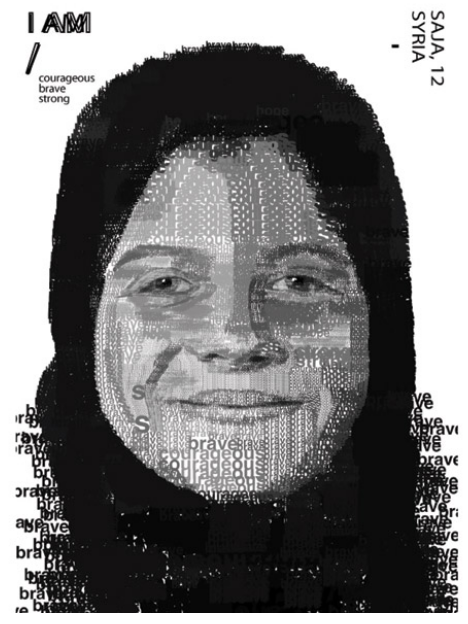 In partnership with Hereford College of Art & Design, an exhibition of artwork inspired by the concept of "sanctuary" will be on display at the Courtyard Theatre from 17-25 June 2022.

Students on the UAL Foundation Diploma in Art & Design course at Hereford College of Arts were asked for a personal and artistic response to the idea of “Sanctuary”. The catalyst for this project was watching and discussing a range of films which unlocked the personal stories of people who have been forced to flee their homes. The students considered the often traumatic reasons why people had to leave and what it would feel like to be separated from family, friends and familiar culture.

The students’ task was to further investigate, challenge, problem solve or document the parts of the displaced person’s story that most captured their imagination. They have used a wide range of media including photography, 2D and 3D collage and construction, textiles, drawing and illustration as well as painting, ceramics, and digital media.

Some of the students brought their personal connections to this project and worked from family photos and artefacts. The students’ responses ranged from telling stories of the peaceful and familiar home culture, of refugees’ journey from their homes to the UK and the welcome they received, and portraying life in refugee camps. As a result of this project one student said that their original stereotype of refugees was profoundly challenged and changed after a conversation with a displaced person living in Hereford.

The recent crisis in Ukraine has been the inspiration for some of the work in this exhibition, produced by other local artists responding to the daily tragedy unfolding before their eyes through images on the news and social media.