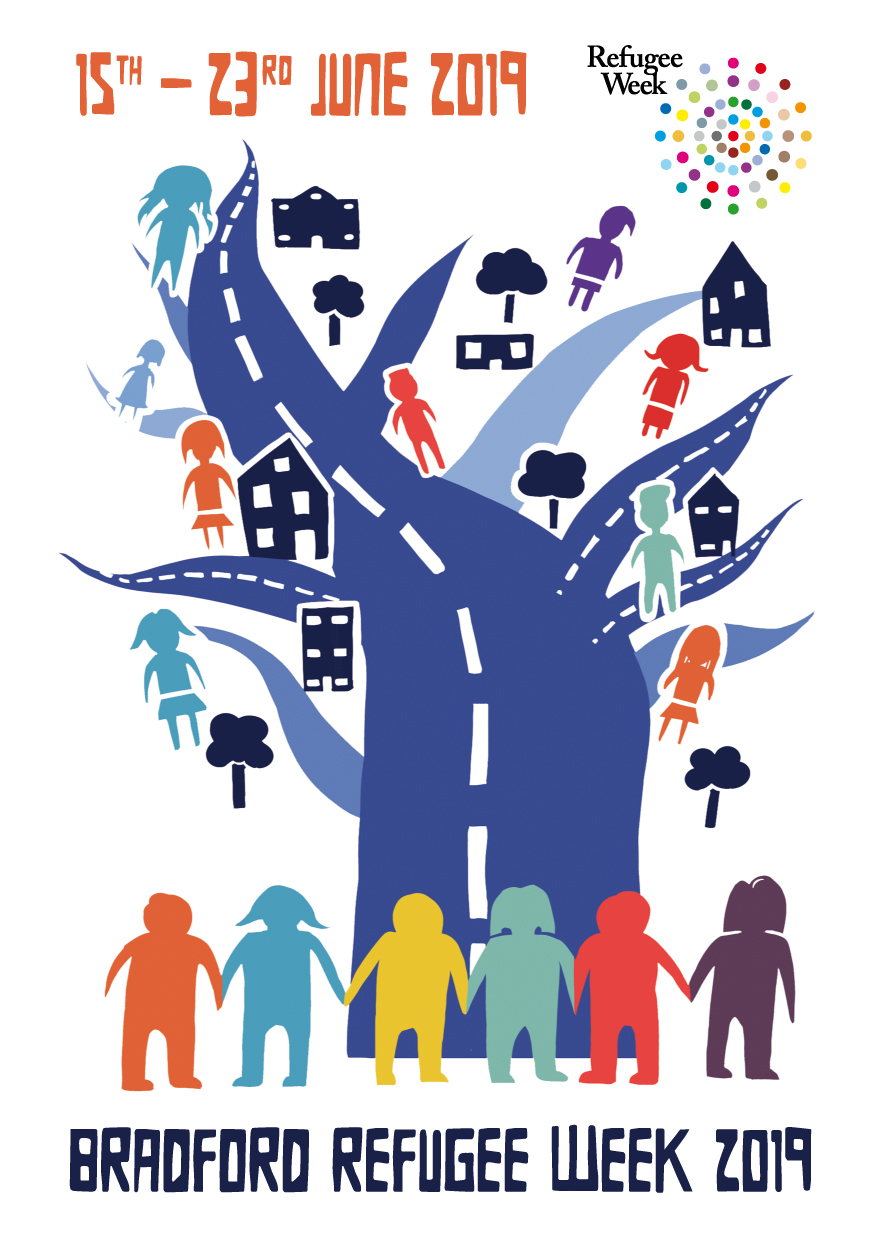 Keep up to date with all events on the Bradford Refugee Week calendar here.

Refugee Week is a national event – the UK’s largest festival celebrating the contribution refugees make to our society, and promoting understanding of why people seek sanctuary across the globe. This year’s programme here in Bradford is buzzing – it’s a jam packed week with something for everyone to enjoy and think about, reflecting the diversity of our city and the enthusiasm people have to get stuck in and help make things happen.

And it’s happening all over the place; parks, Bradford Cathedral, schools, libraries, on the Big Screen, over the airwaves, behind the scenes at St Georges, Capital of Cycling, community centres, museums, mosques and churches.

Bradford has been greatly enriched by migration over centuries, and in 2019 people have sought safety here from many different countries. We are so pleased that some of their experience will form part of the Refugee Week programme this year, and there are plenty of opportunities to discover more about the conflicts and difficulties that have given rise to leaving their home country. Highlights include Beats of the Antonov, hosted by the Sudanese Community in Bradford at Delius Arts and Cultural Centre. This powerful documentary explores how the Sudanese people are using traditional musical forms in response and resistance to the repeated bombing of Darfur. Films form a strong thread throughout the week with Gaza, The Dream of Shahrazad, Female Voice (made by Syrian women film makers) examining current and recent world political events, and The Visitor and Grow Your Own presenting stories closer to Bradford and a chance to discuss local issues. There are daily Big Screenings of locally made films about Bradford refugee projects – so get an ice cream and watch for half an hour starting at 11am from Tuesday to Saturday.

Bradford Council have joined the party this year with story time and craft sessions in libraries across the district, an introductory training session for people working with migrants, and fabulous sneaky peek behind the scenes tours for refugees and friends, at St Georges. Both city centre museums are organising events – so do get along to the Science and Media Museum and the Peace Museum. And while you are in the city centre, do have a look at the 3 exhibitions of art work.

Refugee Week has a significant celebratory dimension and Bradford is embracing it wholeheartedly. From the opening launch featuring the parade around the Mirror Pool led by the fabulously decorated 4 seater taxi bike, pedalled by the young unaccompanied asylum seekers who created it and escorting the Lord Mayor, to the Great Get Together in Peel Park - a fun packed community festival. From football to face painting, blinging your bike to cosy story time, it’s a chance to stretch your legs and your imagination, meet your neighbours and make new friends.

All of these events are open to everyone and are either free or pay as you feel. Alongside all of this are activities that refugee groups have organised for themselves too.

Although the printed programme is now fixed, there is still time to add your event to Bradford Refugee Week – use the Facebook page and of course our very own BCB106.6fm will be broadcasting throughout the week. So make sure they know about what you are up to. Thursday June 20th is World Refugee Day and BCB will be focussing on refugee experience, achievements and issues throughout, as well as highlighting the work of key supporting organisations .