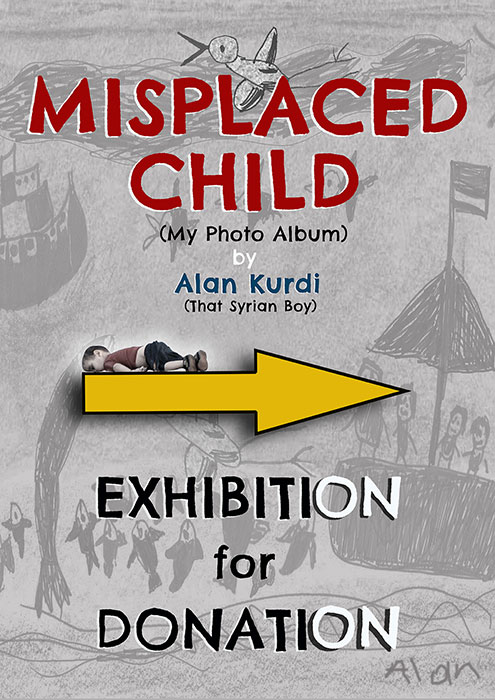 7 months after the death of Alan Kurdi's death, the little 3-year-old Syrian boy who was washed up dead on a Turkish beach, an artist from North London has started an art campaign to raise awareness about the number of children caught up in the crisis. The exhibition of the artist’s work instead of being placed in galleries, will be placed in cafes around London so ordinary people can learn more about the plight of these children.  The numbers of children caught up in the war have more than doubled in the last year, according to a recent UNICEF report. This moving and evocative art campaign imagines Alan’s life as it could have been lived if he had survived and joined his relatives in Canada. Utilising photos of Alan’s lifeless body, the title of the campaign "Misplaced Child" refers to his misfortune to have been born in the place at the wrong time.  The photo shots imagine Alan doing ordinary things any child in the West might hope to experience such as building his first snowman with friends and going to a funfair.

Alan Kurdi was found dead near the Turkish resort of Bodrum on 2 September 2015. According to new social media analysis, his image made global headlines within hours after photographs of his body were taken by a Turkish journalist Nilüfer Demir and quickly spread around the world.

The artist prefers to remain anonymous in order to retain the focus on the child victims involved in this conflict. The artist will donate part of the money from each sale to children’s charities and there will be charity donation boxes at the exhibitions.