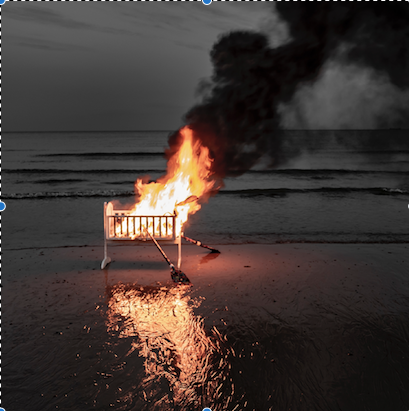 “News from Nowhere” is a group exhibition for Refugee Week curated by award winning artist, Dr Gil Mualem-Doron and produced by the Socially Engaged Art Salon (SEAS). The “Nowhere” from which the exhibition’s “news” arrives is not William Morris’ utopian country but the dystopian places no one would like to find themselves in: from the Mediterranean’s abyss, to the Palestinian occupied territories, from countries still persecuting LGBTQ+ people to countries where xenophobia and racism are still tolerated.

Addressing Refugee Week’s 2021 theme, ‘We Cannot Walk Alone’, the exhibition launch will include a procession with music and the public art intervention, “Conversations From Calais”. This starts at the new LGBTQ+ Ledward Centre/ Jubilee Library where the first part of the exhibition begins. It then meanders to the Black and Minorities Ethnic Community Partnership Centre (BMECP) where visitors can view the large room installation, ‘Message in a bottle’, which was created with more than 250 residents of Brighton and the South East.

Richard Williams, Chair of Sanctuary on Sea, said: “The COVID pandemic has shown us how dependent we are on each other, on our neighbours, on our diverse communities. We are part of a shared ‘us’. In the words of Martin Luther King, “We cannot walk alone”. This Refugee Week, reach out and walk with someone who is different from you, either in person, or virtually at this or one of the many other events taking place in Brighton & Hove and across the country.”

The exhibition, with more than 20 local and international artists, is a continuation of SEAS’ May exhibition “The Face of the Other” which explored representation, the process of ‘othering’ and the politics of visibility. The large room installation “Message in a bottle” by Jane Lancashire and Gil Maulem-Doron began with Jane’s series of workshops where participants wrote messages to refugees that have drowned in the Mediterranean. Using hundreds of recycled bottles the messages were transformed into a three dimensional topographical map that adorns the ceiling with an amalgamation of Victorian gazebo and a refugee makeshift shelter. Jane says: “This community art project highlights the empathy many people feel towards the plight of sanctuary seekers which is in sharp contrast to the UK government’s attitude towards them.” The eerie installation at the BMECP basement includes the chilling testimony of Mohamad Aljasem, a young Syrian asylum seeker and Hummingbird Project Young Leader, about his escape from Isis and his journey to the UK.

Using socially engaged practices, but in a very different way, the project “Conversations from Calais” by graphic designer and illustrator, Mathilda Della Torre, is a public art project where transcriptions of conversations between asylum seekers and volunteers in Calais are posted in public spaces around many cities in the UK and abroad. After having volunteered in Calais, Mathilda spent a year trying to find ways of documenting and sharing what she experienced there. She wanted to create a project that was impactful and dignifying to the volunteers and migrants she had met. She wrote down all the conversations she had with migrants and it grew from there. At the opening of the exhibition on June 13th hundreds of printed conversations will be used to cover up the entire Ledward Centre windows - blocking most of the exhibition - for the duration of Refugee Week. Asked what brought her to create the project, Mathilda Della Torre said that: “It is a way of bearing witness for the thousands of displaced people stuck in Calais and trying to reach the UK, whose voices are so often silenced or ignored”.

One of the highlights at the other exhibition site - The Ledward Centre - is the project ‘Where Love is Illegal’. Led by photographer Robin Hammond, the project documents personal testimonies of tens of LGBTQ+ refugees around the world who had to flee their home countries in fear of persecution. This socially engaged photography project includes a storytelling campaign in which the participants chose how they wanted to pose, what to wear and how to present themselves. They hand wrote their stories and letters to be shared with the world and the texts can be read in the online exhibition and the printed zine.

Another project related to LGBTQ+ asylum seekers will be presented in a series of short films by SOGICA, a research group from Sussex University. SOGICA explored the social and legal experiences of asylum seekers across Europe claiming international protection on the basis of their sexual orientation or gender identity (SOGI).

And there is also a Johnson. Alqumit Alhamad’s digital collage of the UK Prime Minister’s mug on the rear of Leonardo da Vinci’s A Standing Male Nude decorated with enigmatic text in Arabic. The work is part of  the series “News Print” in response to Johnson calling Gay people "Bum boys" as well as his calling Hijab-wearing women "letterboxes". An interview with Alqumit that was published last year in the book “'Queer' Asia: Decolonising and Reimagining Sexuality and Gender” will be included in the exhibition’s zine.

Addressing the world's oldest unsettled refugee population, the Palestinian refugees, the exhibition will feature the work of Visualizing Palestine, an independent, non-profit laboratory for innovation at the intersection of data science, technology, and design which creates data-driven tools to advance a factual, rights-based narrative of the Palestinian-Israeli relationship. Often described as “complicated issue”, Visualizing Palestine succeeds in making clear the history of the conflict and the everyday life of Palestinians under an Apartheid regime. The particular works chosen for the exhibition are related to restrictions of freedom of movement and other human rights violations.

The exhibition can be viewed in the windows of The Ledward Centre, at the Black and Ethnic Minorities Community Partnership (BMECP) and online on SEAS’ website (www.seasbrighton.org) from 13th June.

At 5pm the event will culminate in a live broadcast from BMECP via Zoom, a talk by the exhibition’s curator, some of the contributors and a Q&A.

Tickets are free, subject to Covid restrictions, and can be booked here: http://bit.ly/NewsfromNowhere

The exhibition is supported by The Art Council England, The Rainbow Trust, BMECP,  Brighton & Hove Communities Fund and The Irene Mensah Bursary.