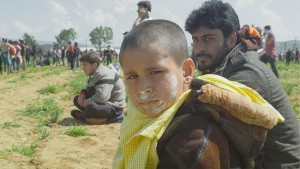 See Ai Weiwei’s The Rest & Midnight Traveler by Hassan Fazili, screened as part of #CinéHumanité, a joint initiative of the RBKC Refugees Welcome Committee and the Ciné Lumière. This Refugee Week see two of the most celebrated new documentaries of 2019. The Rest, from the renowned artist Ai Weiwei and Midnight Traveler, award-wining film premiered at Sundance and Berlinale take distinct and complementary approaches to exploring the issues facing refugees & migrants around the world today. Ai Weiwei’s The Rest portrays the reality facing refugees trying to enter Europe in a sequel to his award winning Human Flow (2017), making seen what has been hidden from us since refugee issues have left the headlines. In contrast, Midnight Traveler is a highly personal story of one family’s effort to escape the bounty the Taliban set on their head and their journey in pursuit of safety in the EU. Both documentaries include a short panel discussion and reception with refreshments available. The Rest, June 18th, 2019, 18:30. Midnight Traveler, June 20th 2019, 18:30. Venue: Cine Lumiere, nearest Tube: South Kensington. For further information, contact rbkcwelcomecommittee@gmail.com.

Film Synopsis: Ai Weiwei’s follow-up to Human Flow is a sharp and moving account of today’s refugee situation. The Rest focuses on Europe, the world’s defender of human rights, as it closed its borders to thousands of refugees from Africa, the Middle East and Afghanistan. They sought refuge in France, Italy, Germany, Greece, Sweden, and Turkey, but most have not found the safe havens they wished for. Now they are no longer the centre of media attention, put to rest, so to speak, and yet unable to move forward and simply live.