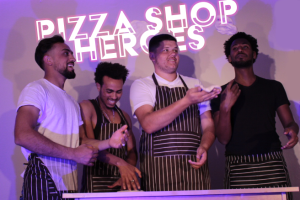 In a special event, Phosphoros Theatre will be bringing their trail blazing show ‘Pizza Shop Heroes’ to Amnesty International UK on 24 June 2019. The event is presented in partnership with the Amnesty UK Children’s Human Rights Network and Duncan Lewis Public Law Solicitors. After the event, a discussion will be presented with members of the cast and Kate Duffy and human rights Solicitor Jamie Bell of Duncan Lewis who represented two of the actors in their successful applications for leave to remain in the United Kingdom.

Jamie was asked to assist the cast members by Phosphoros Theatre when both had found themselves excluded by the UK’s labyrinth of an asylum system and had been abandoned by their previous representatives who believed that their cases did not have sufficient ‘merit’ to succeed. Both cast members are of nationalities [Afghan and Albanian] that are not accepted by the Home Office to justify the grant of refugee status. Phosphoros Theatre provided vital support and crucial evidence to demonstrate the cast member’s key contribution to the culture of the United Kingdom

Through numerous setbacks and battles, including disinterested and vindictive judges, offensive Home Office presenting officers and too many days in the Asylum Tribunal, both have now been granted leave to remain.

The cast members, Kate and Jamie hope to provide a fascinating insider insight into how the struggles of the cast informed their art.

Pizza Shop Heroes is the accurate reflection of the experiences that the cast of Phosphoros Theatre had fleeing their home countries and seeking protection as children.

Four young men working your average shift in your average pizza shop take us on a journey across time and continents to show how extraordinary they are. From leaving their homelands of Eritrea, Albania and Afghanistan to seek asylum as children, they explore how they got here, where they’re going and what they’ve learnt along the way.

It’s an autobiographical story of male and cultural identity, of migration stories shaped by Europe’s colonial past, of family and fatherhood. Using the company’s trademark warmth and wit, these lived-experience actors share the stage with a refugee caseworker to perform a lyrical collage of memories, hopes, dreams and imagined realities. From prisons in Libya and Greece to conversations with absent Mothers to raising the next generation of sons. Powerful, celebratory, affirming, authentic; this is theatre that puts refugees centre stage.

PHOSPHOROS THEATRE:
This unique emerging company, now officially recognised as a Theatre of Sanctuary, began in a housing project in NW London in 2016 for male Unaccompanied Asylum Seeking Children who came to the UK on their own. The actors have told their ‘stories’ again and again to the Home Office and Social Services via the mouths of interpreters and solicitors, and it is the desire to reclaim their own narrative that grounds Phosphoros Theatre’s illuminating third production.

DUNCAN LEWIS PUBLIC LAW SOLICITORS:
The Duncan Lewis Public Law department continues to be recommended by The Legal 500 with the 2019 edition reporting its 'strong presence in this area of the law, making a particularly dominant contribution in immigration, asylum and prison law.'

The Public law team has experience in all aspects of judicial review claimant work, including obtaining emergency orders and other interim relief to prevent breaches of human rights, following up judicial reviews with actions for damages in both the County and High Court and successfully pursuing judicial review matters to the Court of Appeal and Supreme Court. A particular focus is the team’s work handling cases of the deprivation of British citizenship and deportation threats, with a niche specialism in challenging the treatment of immigration detainees and other marginalised communities.

Written by Dawn Harrison with the Company

More images are available and all company members can be interviewed.