Fighting To Be British 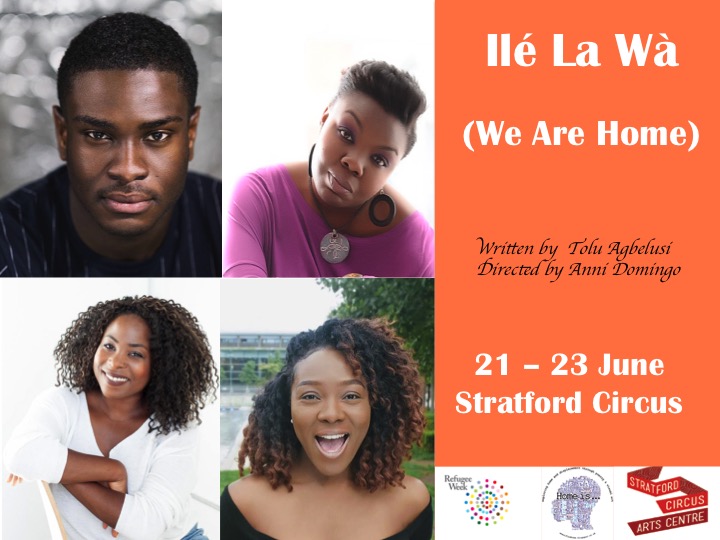 Men the age of my father don’t cry in public, don’t watch helpless whilst others speak for them. Not in my community—where women of this same generation raised children not to air their dirty laundry. It’s hard to believe all that now.

Over the last month, our TV screens have hosted too many elders overcome with grief, bewildered that they gave whole lives to a country that’s hell-bent on forcing them into exile—insisting beyond all evidence that the UK is not their home. I’m talking about the Windrush Scandal.

Not for the first time, I find myself asking, “How do you belong to a place that doesn’t see you”?

In Ilé La Wà, a Yoruba phrase that means ‘We Are Home’, caught in a web of the government’s hostile environment, as collateral damage or target, four characters’ lives are interrupted when they can’t produce ID in a spot check. What follows in the holding room where they wait for verification of their legal status’, are a series of interrogations of the self and each other, laying bare the realities and implications of always being ‘the other’ in a place you call home.

The thing with exclusionary sentiments defining Britishness along colour lines is that the policy makers & offensive statements utterers don’t see people. They see labels and speak without ever thinking, that behind the labels of immigrant, refugee, asylum seeker, black, etc. there are stories and whole lives deserving of dignity. So when the government is shamed into apologising over the ‘hostile environment’ policy being implemented without humanity as if this isn’t by design, we have to ask who is fooling who?

2013 saw government sponsored ‘Go Home’ vans parading our streets and immigration enforcers ‘randomly’ stopping individuals (who looked like immigrants) to demand identification. Since then we’ve seen the government legislate for banks, churches, landlords, etc. to effectively become border patrol. Children born here have been deported, others have had to make themselves stateless. Then there are those unaccompanied minors who suddenly have to fight the implications of learning, that after years in the system, they aren’t considered British. Not to talk of asylum seekers who’ve been refused status but can’t be sent to their countries of origin for safety reasons, and so become destitute. There is the collateral damage—those who look like immigrants, which often means non-Caucasian. People who even with British passports are treated like they don’t belong. It’s as though everyday, we who are not the status-quo are being asked and having to ask ourselves:

“You have chosen Britain but has it chosen you?

Ilé La Wà interrogates the layers of what it means to fight to be British. Through humour, drama, poetry and real narratives that connect, it delves into the stories behind the labels, unravels the impact, the ways we cope including by insisting loudly ‘We Are Home’—Ilé La Wà.

For interviews or queries, contact Tolu Agbelusi on whenifindhome@gmail.com