“It feels like a family”: An interview with Sophie Besse, director of a comedy about Calais 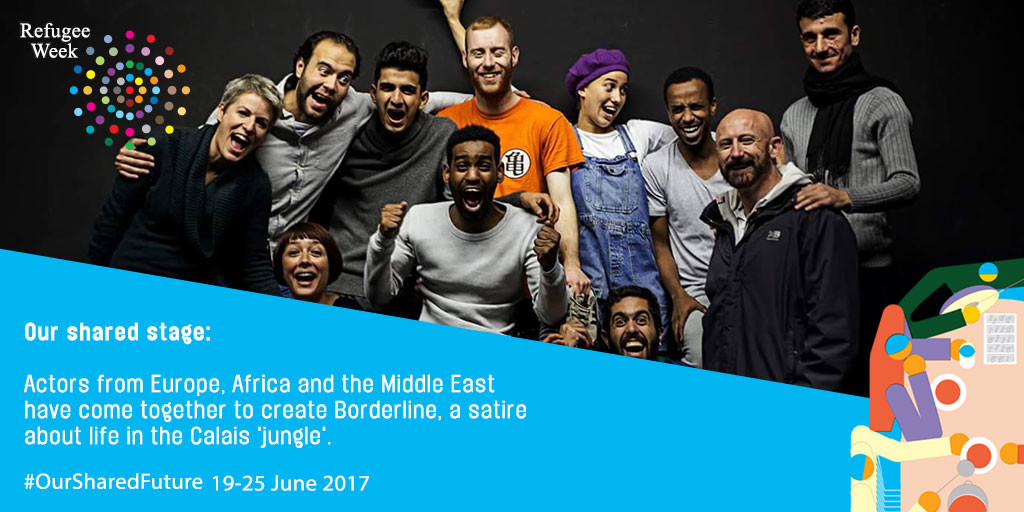 It’s the refugee arts project everyone’s talking about. In the fifth and final edition of the Our Shared Future blog series, Marienna Pope-Weidemann talks to Sophie Besse, director of Borderline comedy about Calais

Calais is not a place we associate with comedy. But danger, deprivation and desperation is only half the story. Sophie Besse, artistic director at PSYCHEdelight Theatre Company, has set out to tell that story in her bold new play, Borderline. This moving and insightful piece of theatre features caricatures instantly recognisable to anyone who’s spent time in a refugee camp, from the clueless officials to the bleeding heart volunteer that won’t cook or clean but wants to sit and sing about ‘the Syrian pain’. Like all the best satires, it amuses without sugar coating or compromising its message. Where Calais meets comedy and theatre meets therapy, this play will have you laughing before you know what’s hit you.

Sophie believes passionately in the power of drama to connect people with each other and with bigger issues. Graduating drama school in France with a love of theatre but deep discomfort with the industry culture, she resolved to use her skills to help those often denied a voice. After five years training in psychotherapy, she started work as a counsellor at a young offenders prison where she developed a unique way of using drama to heal trauma, running workshops for the young women there. “They were incarcerated with adults – illegal, but there you go – and had no space that was their own. The workshops gave them that and raised their confidence.” These workshops that inspired her first play, A Woman Inside.

In 2015 Sophie went to the Calais camp to volunteer and deliver workshops, and found herself with one foot in each world: the world her friends and family feared for her to tread, the Calais that looms large in the European mind, and on the other hand the reality in which she found herself: a warm and welcoming community springing up from nothing, hammered together with nails, tarpaulin and sheer force of will.

Most visitors to ‘the Jungle’ – or at least those with eyes to see it – have been surprised to find just that: a high street, complete with shops, hairdressers, restaurants, a church, a mosque, a school, not a jungle at all but a remarkable reflection of what we might hope our own communities might re-create if forced from our own homes; something resembling civilisation. “People at home were so scared for me, thinking these people were terrorists or at least scary just because they’d been through such terrible things. And yet what struck me daily was their warmth, their resilience, the sheer humanity. I wanted to the turn the coin over and show this other side.” Sophie watched journalists come fishing for victims with tragic tales. But when the sun went down and the press went home, she heard music and dancing and laughter even in this, the hardest of times.

That’s where Borderline was born. The play came about through collaboration: a living example of the integrated community Sophie wanted to portray. It was devised by thirteen performers, some of them first time performers: seven refugees from Afghanistan, Sudan and Syria plus six international volunteers from across the world. With different languages in the room, cultural gulfs and historical conflicts to bridge, the process wasn’t quick or easy – but it’s been one of the most rewarding of Sophie’s life. “The real work was about building relationships,” she explains. “We shared meals together – and a Facebook group of course – listened to each other’s experiences. I wrote the skeleton script based on that listening, plus lots of improvisation. Being a director can be quite lonely, but with Borderline we built very strong bonds. The cast will stay at my place when they come from wherever they’ve been sent. Two of them are under 15 as well, so it really feels like a family. And when you break it down, that’s what our shared future means, isn’t it?”

Borderline will be touring in Germany this September, but the cast are already planning their next project, looking at the refugee experience in the UK. “It’s so hard because people think they’ve reached the dream when they arrive here,” says Sophie. But once someone is recognised as a refugee with right to remain, a whole new battle begins, with 28 days to find alternative accommodation before they are made homeless. This will be the focus of Borderline’s sequel. “Do you know what people say to me? ‘I miss the Jungle.’ So, that’s what we want to tackle next: that crazy system – but also what British communities are doing to help.”

While flyering for Borderline, Sophie’s sometimes challenged about whether it’s appropriate to perform comedy about such a tragedy. For her, it’s essential. “I explain it makes the cast feel good to make people laugh. People don’t realise how heartbreaking it is to feel like you only inspire pity. Plus, you can feel all the sympathy in the world but still see these people as a burden. And if you don’t feel strong enough to carry that burden, you still won’t pick it up. Sympathy opens the heart but struggles to open a mind or a nation on its own. So what Borderline says is what everyone whose been to Calais knows: that these people – there’s all sorts, as with any group – but as a whole, are so resourceful, so resilient; not a burden at all, but a gift.”

Meanwhile, Sophie is committed to continuing to use drama as a means to create community, speak truth and heal trauma. She now runs the Together Workshop, where refugees and Londoners spend time together, build friendships, perform and create works of art. “They’re allowed to laugh, to make a new life. That’s all any of us want. It’s easy to underestimate the importance of just making friends, creating spaces where they get to be more than refugees. But it saves lives, it really does.”

Borderline was at Southbank Centre 20 and 21 June, and will be at Migration Matters Festival in Sheffield on Saturday 24 June, for Refugee Week.