A shared love of food and family recipes is something that connects us all, whatever our background. The majority of refugees are forced to flee their homes carrying only the most necessary things. Some leave behind everything except the clothes they are wearing when they start their journey to safety. One of the few things that people are able to bring with them is their passion and love of food. For refugees, cooking can bring not only joy but also empowerment when first arriving in the UK. It is also a way of keeping their home country alive within their families and for their children.

This Refugee Week, join our Simple Act challenge and Share a Dish! Get cooking and feasting together and discover some new recipes and stories, then share them with your friends on social media. Be inspired by our seven recipes from refugees below – and don’t forget to use out hashtags: #refugeeweek2019 #simpleacts #shareadish 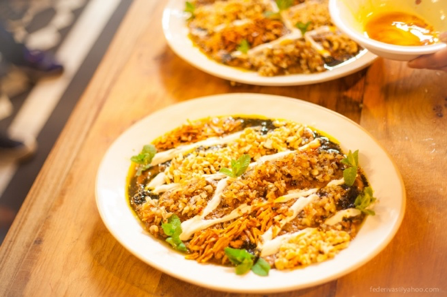 This mouth-watering aubergine dish is all the way from Iran, made by Elahe who came to the UK as a refugee in 2006. Kashk-o Bademjan or Kashk Aubergine is one of her much-loved dishes she loves to share. With its celebratory garnish and served with Middle Eastern flatbread, it works well as a starter or side dish.

‘I feel alive when I’m cooking. Food is an important way for me to stay connected to my past and to my country.’ says Elahe, whose happiest memories are associated with food. ‘I remember as a child waking up to the smell of my grandmother’s cooking and the beautiful aromas as she mixed together the ingredients in the early mornings.’

Adjusting to life as a refugee in the UK was hard for Elahe, a mother of 3, but food became her creative outlet as she worked to overcome language barriers, loneliness and being unable to work as a psychologist. With her daughter Parastoo as a helping hand, she started to work with Migrateful UK – an organisation helping refugees and migrants to run their own cookery classes. Here she started to gain self-confidence and found purpose again.

To see the full recipe and method for Elahe’s Kask Aubergine, click here. 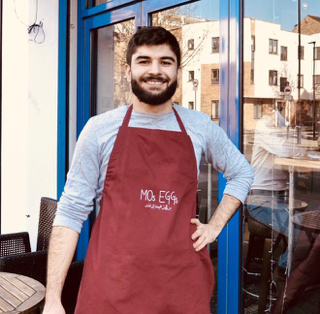 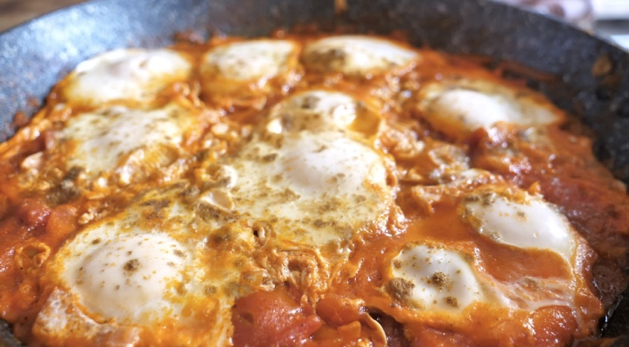 Mo created his recipe for Jungle Eggs in the ‘Jungle’ refugee camp in Calais in 2016. He cooked his signature dish for all his friends in the camp – refugees and volunteers from all over the world. Equipped only with a small gas stove and a large pan, he conjured up feasts with the ingredients donated by charities. Making and sharing food, eating from one pan together, was his way of giving back the love he was shown during these difficult times.

Mo’s cooking is inspired by his upbringing in the mountains of Ain al-Fijah close to Damascus, Syria, where fresh vegetables, fruit and herbs grew on his doorstep among the animals and chickens his family kept. People would regularly come together to cook, share and enjoy food. Mo’s love for good food comes from his mother, ‘The best chef in the world’ he says.

Since arriving in the UK, Mo has been wowing his British friends and customers with explosions of flavours and colours at London’s first Syrian monthly brunch pop up @mos_eggs. During Refugee Week he’ll be cooking up some tasty Syrian flavours @ombrabar.restaurant as part of the Refugee Food Festival.

To see the full recipe and method for Mo’s Eggs, click here. 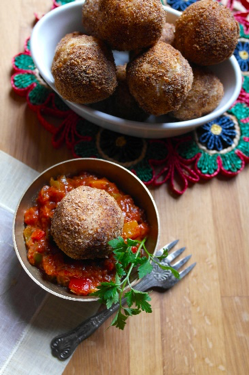 These tasty Nigerian Yam Balls are a recipe from Shakirat, who came to London as a refugee from Nigeria in 2002.

When Shakirat was forced to flee her home country she brought her much treasured recipes with her to the UK. One of her favourite dishes is Yam Balls with a special twist. Yams are the yellow stepsister of the sweet potato, a staple food in many countries in Africa, the Caribbean and the South Pacific. ‘Back home not everyone adds fish to the yam balls, but personally I find the smoky flavour and aroma of smoked mackerel pairs well with the refreshing tomato sauce.’

Shakirat’s passion for cooking developed early. Encouraged by her father she went to cookery school and started working at a guesthouse in a wealthy area of Nigerian capital Lagos. ‘Knowing there are people out there who like your food is a great feeling. Eating these dishes here in London evokes all the beautiful memories of the carefree and independent life I lived during that time.’

Shakirat now hopes to host supper clubs in London and would like to run her own food business in the future.

To see the full recipe and method for Shakirat’s Yam Balls, click here. 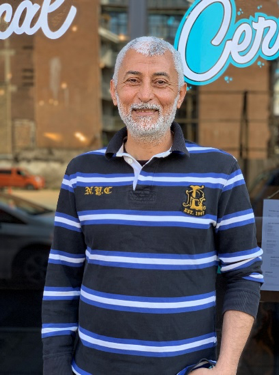 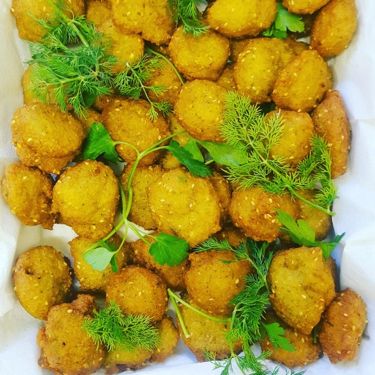 This delicious dish is a recipe from Ahmed who originally comes from Egypt. Falafel is a favourite street snack on the streets of London, it is also an essential and much-loved part of Middle Eastern cuisine. Ask a Palestinian, Syrian, Lebanese and Egyptian about their favourite falafel recipes and you will get four different answers!

Ahmed became a refugee in the UK in 2015. He first learnt to make falafel from his mother. In Egypt it is traditionally eaten for breakfast and contains coriander and basil, which gives it a green colour – something unthinkable outside of North Africa! When visiting his mother, Ahmed would wake up from the smell of freshly made falafel before the family gathered to eat together every morning. ‘When we were children, my father would tell us ‘You will lose your life if you don’t eat a proper breakfast in the morning!’

Ahmed will be dishing up his very own falafel @breddostacos in Clerkenwell as part of London’s very first Refugee Food Festival.

To see the full recipe and method for Ahmed’s Falafel, click here. 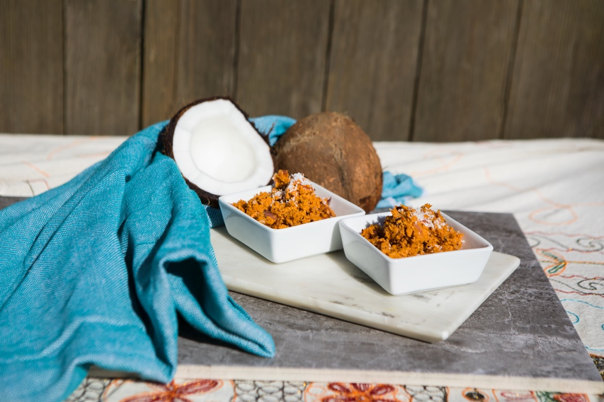 This tasty coconutty condiment comes all the way from Sri Lanka. Sambal is a traditional dish in Sri Lanka with many variations. It can be made using raw or cooked vegetables and spices, and sometimes Maldive fish flakes for extra flavour, which is the preferred version that Yalan, a Tamil refugee from Sri Lanka is sharing with us here.

Cooking is so important within the Tamil community. Making sambal connects Yalan back to his homeland and the loved ones he had to leave behind: ‘My Mum used to love making this dish. I used to prepare it with her in Sri Lanka. Now I make this dish myself in the UK.’

Yalan has worked extensively with Freedom from Torture after suffering horrendous mistreatment in his own country, but has courageously rebuilt a new life for himself in the UK where he loves to cook and share food with his new friends and family.

To see the full recipe and method for Yalan’s Coconut Sambal, click here. 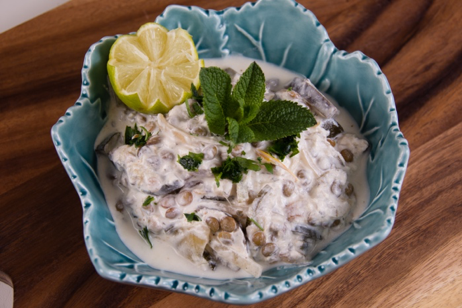 Salma is a Syrian refugee, now living in the UK, who learnt this dish from her mother and loves it because it takes her back to memories of her homeland.

Boramiyeh is a traditional salad-starter made with lentils that takes its name from a village in Afrin, Northern Syria.  Traditionally, it would be cooked up on Fridays in Salma’s home village when families gathered together to share food.

Salma’s advice is to eat it once a week as a nutritious health-kick – and apparently it is also recommended to women after they have given birth to help them recover.

To see the full recipe and method for Salma’s Boramiyeh, click here.

(Recipe extracted from Baladi: Palestine – a celebration of food from land and sea by Joudie Kalla, published by Jacqui Small) 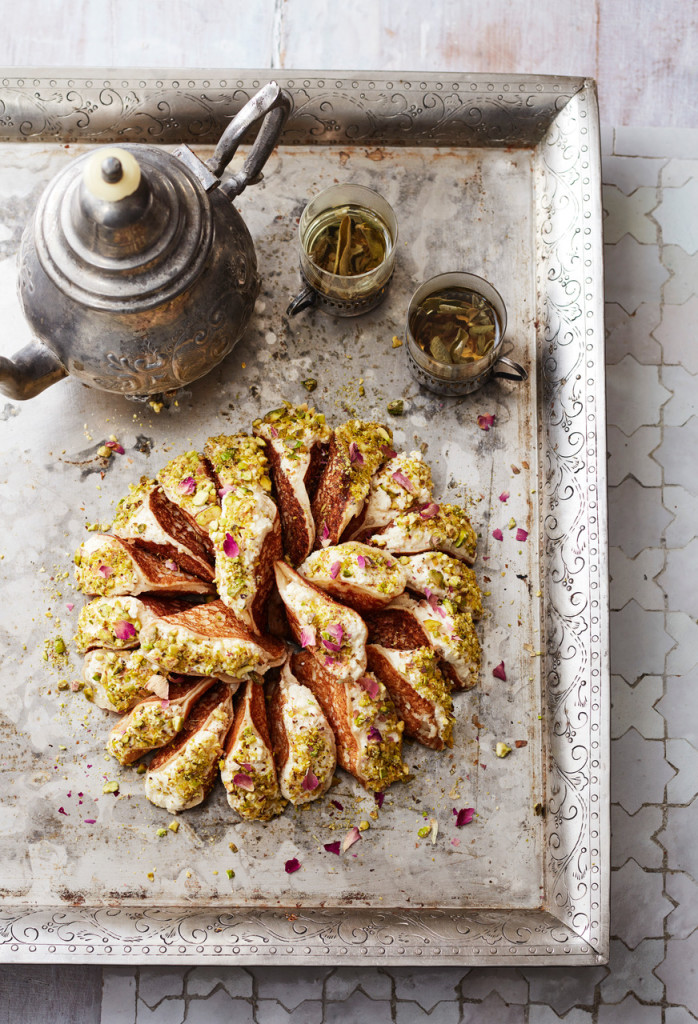 Joudie Kalla is a British-Palestinian chef and the grandchild of Palestinian refugees. Having lived most of her life in London, she cooks to keep the memory of Palestine alive. Her books, Palestine on a Plate and Baladi, are inspired by her mother, aunties and grandmothers, who share her passion for cooking.

Joudie has shared her recipe of Qatayef, soft pillowy pancakes that are simply gorgeous. They are freshly made and stuffed with all sorts of fillings – cream, pistachios, walnuts, cheeses. They are sometimes eaten soft and sometimes fried, the choice is yours – the method of preparing them and putting them together is the same. Joudie makes these for special occasions such as Eid and birthdays, as they are such a treat and also look beautiful.

‘I love making this dish as it always reminds me of my mum and aunties. These recipes are all passed down from my grandmothers who taught them about traditions and history and culture. Dishes like this are very representative of celebrations and coming together as a family. The best moments are watching them and being involved in the making of dishes like that and pass them on to our future generations.’

To see the full recipe and method for Joudie’s Qatayef, click here.

(Recipe extracted from A Taste of Syria cookbook) 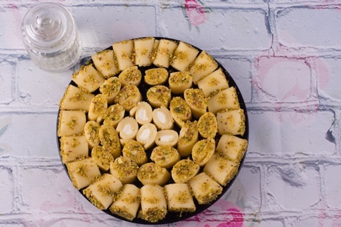 This sweet treat called Halwait Aljoben is a recipe from Hayat, a refugee from Syria. When Hayat first arrived in the UK, making and sharing her own Syrian dishes helped her to settle into her new hometown of Coventry.

Each part of the Syria has its own unique version of Halawait Aljoben. Hayat first learnt this recipe from her grandmother and it reminds her of everything which she loves about Syria, including the long trip to visit her grandmother, who would always prepare this for their arrival. The ritual in Hayat’s family for welcoming visitors includes offering Arabic coffee and tea, followed by lunch – and dinner!

At the end of a meal desserts like Halwait Aljoben are always offered around. It’s a famous dish in Hama and Homs and a must-try for anyone visiting Syria.

To see the full recipe and method for Hayat’s Halwait Aljoben, click here.